Nation Once Again (A)

Back to Nation Once Again (A)[edit]

NATION ONCE AGAIN, A. Irish, Song Air and March. D Major. Standard tuning (fiddle). One part. The song "A Nation Once Again" is the product of poet and writer Thomas Osbourne Davis [1] (1814 - 1845), a founder of "Young Ireland" and editor of the "The Nation". Davis espoused an inclusive view of Irish nationalism, and urged unity between Protestants and Catholics toward the goal of Irish independence. He also was convinced that "a song is worth a thousand harangues", proving his assertion with several stirring pieces that still resonate today. "A Nation Once Again" was first published in The Nation in July, 1844, and proved immediately popular. His lyric begins: 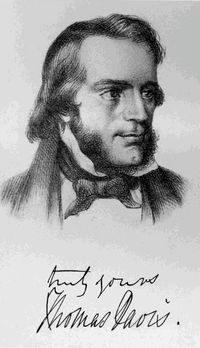 When boyhood's fire was in my blood
I read of ancient freemen,
For Greece and Rome who bravely stood,
Three hundred men and three men;
And then I prayed I yet might see
Our fetters rent in twain,
And Ireland, long a province, be.
A Nation once again!


See also listing at:
Jane Keefer's Folk Music Index: An Index to Recorded Sources [2]
Hear the song sung by The Dubliners at the Internet Archive [3]
Hear the Kilfenora Céilí Band playing the tune in 1958 at the Comhaltas Archive [4]

Back to Nation Once Again (A)[edit]