Back to Natural Bridge Blues[edit]

NATURAL BRIDGE BLUES. Old-Time, Bluegrass; Country Blues. USA, Missouri. A Major. Standard tuning (fiddle). AA'B. Built on a blues progression, the piece was composed by Tennessee fiddler Tommy Magness (1911-1972), who played with Bill Monroe, Roy Acuff, and Fiddlin' Arthur Smith. It is named for Virginia's Natural Bridge [1], a limestone formation 215 ft. high, and 90 ft. long that is the remains of the roof of a cave or a tunnel through which a creek once flowed. It was a sacred site for indigenous populations, and was considered at one time to be one of the seven natural wonders of the world. Thomas Jefferson purchased the land surrounding the formation ("the most Sublime of nature's works") and built a cabin there, used by guests and visitors. 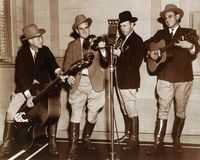 Magness first recorded the melody as a member of Roy Hall's Blue Ridge Entertainers, whom he joined in 1940. "Natural Bridge Blues" was recorded with the group in Atlanta, Ga., and released on Bluebird Records. Missouri fiddler Lonnie Robertson and his wife Thelma sometimes sang the following lyric to the tune on their radio broadcasts:

Oh, the Natural Bridge Blues is a killin' me,
I don't know what to do;
Makes no difference where I roam,
I feel so sad and blue.
Every night when I lay down,
In my dreams I see,
That old bridge a-standin' there,
I hear it calling me. .... [printed in Beisswenger & McCann, 2008]

Back to Natural Bridge Blues[edit]