Back to Ned Kendall's Hornpipe (1)

NED KENDALL'S HORNPIPE [1]. AKA and see "Farewell Mary Ann," "J.B. Miller's Hornpipe," "Old Voile," "Reefer's Hornpipe." American, Reel (2/4 time). USA, Missouri. D Major. Standard tuning (fiddle). AABB. The tune is widely disseminated in the South, into Texas and the Midwest under a variety of titles, although this Missouri title for the tune is the closest to the precursor source tune, "Ned Kendall's Hornpipe (2)." Musically the two versions are closely related. Ned Kendall has been identified either as a famous 19th century keyed-bugle player or as a competition-winning black step dancer of the same era.

Regarding Ned Kendall (1808-1861) the Boston bugle virtuoso and bandleader, a newspaper clipping, shorn of heading and date but evidently from before the turn of the 20th century, related an interview with Richard D. Blanchard, an elderly veteran Boston musician then living in Bridgton, Maine. Blanchard reminisced about the great musicians of the city he had known: 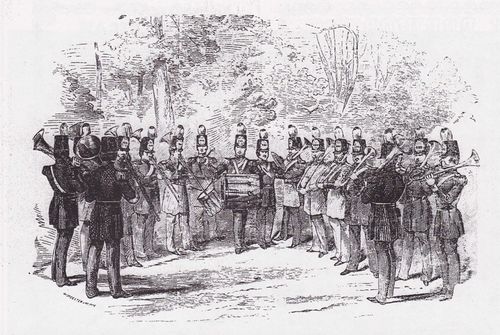 The first regular brass band in Boston," said Mr. Blanchard, "was founded in 1835, by Ned Kendall, who was its leader. Its title was 'Boston brass band.' Before that there was an organization known as the 'Boston Brigade band' - not its great successor by that name -- composed of French horns, serpents, brass instruments, clarionets and drums, in all about 15 pieces. Way back in the twenties there was a band called the 'Dragon.' Ned was leader of and bugle player in the Boston Brass Band till 1842, when he went away and Eben Flagg became its leader. In 1849 Ned Kendall returned to Boston and became the leader of the Boston Brigade band...Nearly all of them are gone," said Mr. Blanchard, sadly..."Ned Kendall...died in Boston"

Kendall did not confine himself to playing just in Boston. For a number of years he traveled with Spaulding & Rogers' circus, leading the band and was renowned as a bugle soloist [Hans Nathan, in his Dan Emmett and Negro Minstrelsy, 1962, pg. 112, says: "Emmett himself tells us that he 'travelled as small Drummer with the celebrated Edward Kendall while he was leader of Spalding and Rogers' Circus Band. I benefited from his superior qualifications as a drummer..." This would seem to indicated Kendall was proficient in more than the bugle]. It should be noted that Kendall played an instrument known as a keyed-bugle, not the valve coronet, and that he was one of the strongest practitioners of the instrument of his era. He and Patrick Gilmore, an Irish coronet player and fellow bandleader, engaged in a celebrated keyed-bugle/coronet duel before the Civil War. He later traveled to England, where the story is told that he played before Queen Victoria and received a silver bugle from her. In 1859 Kendall's health began to decline and he died in 1861. 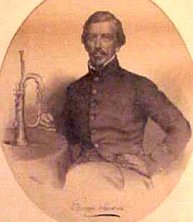 The following story was printed in the Boston Sunday Globe of June 7, 1908, of an interview with a Dr. Joseph Chase of Cambridge, stemming from interest that in that year musicians from the band that still at the time played for Boston fireman's memorial services still went yearly to the Forest Hills Cemetary to lay flowers on Kendall's grave in remembrance of the great musician.

When Ned Kendall was at the height of his popularity a noted New York bugle player had heard so much of Kendall's playing and had heard comparison of his own execution so frequently made with that of the Musician, to the favor of the latter, that he came to Boston for the express purpose of meeting his rival.

On the day of his arrival he accepted an invitation to join a sleighing party. After several hours' enjoyable sleighing the party drove to the Norfolk house and found the ball room al lighted up for the grand dance that was being given by an association of marketmen of Quincy and Faneuil Hall markets.

The New York musician stepped into the side parlor to warm himself at the open fire, before which sat three men, who courteously made room for him. On a table near by lay a key bugle beside a case from which it had been taken. "Ah!" said the New Yorker, having warmed his fingers into flexibility as he toyed with the keys of the instrument. "Any of you gentleman play on this?"

"Yes, I do a little," replied a dark-complexioned man at the fire.

"Play for parties, I suppose?"

"Oh, I do a little in my way," remarked the New Yorker with assumed indifference, and taking up the bugle her an over the scale, gave a few strains and pretty snatches of melody that brought a dozen listeners to the half open door. The dark man opened his eyes wider. "You are an excellent player," said he.

"Oh, only so-so," was the gratified and rather pompous reply. "I suppose you don't go into much except dance music?" "Well, yes, a little. I'm pretty good at imitating a thing I hear played once or twice." And the dark man took up the instrument and played the same strains the other had, but awkwardly and with several hitches and omissions.

"Now even in dance music there can be a great deal of ornamentation," the New York man remarked loftily, warming up with a desire to show off his skill before what he thought an inferior player, and the gathering group that the notes of the instrument had attracted. "The 'Fishers' Hornpipe' is a lively tune, but see what can be done with it." He put the old country dance through a series of variations that made the nerves of every foot whose owner was within hearing distance tingle with electric thrills. "You can hardly follow that as well as the scales, I suppose," said the performer, laying down the instrument amid a buzz of applause from his now large audience.

"Well, I don't know about following anybody, but I may give you my idea of it," spoke up the dark man as he took the bugle and began playing.

If the first few bars of the music made the other player start, the succeeding ones transfixed him as the performer executed strains with a correctness, sill and beauty that he never before heard extracted from a bugle. The variations, trills, tones and melody of the familiar old dance tune was rendered as never dreamed of by that New Yorker, as the music flowed from the bell of the bugle under the skillful manipulation and never failing wind of the performer, who, at the conclusion of his performance, amid a roar of applause, remarked, with the same twinkle in his dark eyes:

"What do you think now?"

"Think!" exclaimed the New Yorker, as he stood with his eyes staring in astonishment. "Think! Why, that no loving man could have done that. You must be either the devil or Ned Kendall!"

"Ned Kendall and no devil," quietly replied the dark man.

Back to Ned Kendall's Hornpipe (1)