NELLY'S HAT. AKA - "The Saucy Little Bird on Nelly's Hat." American (originally), English, Schottische. G Major. Standard tuning (fiddle). AABB. Callaghan (2007) attributes the tune to American musical-theatre composer Harry Tierney (1890-1965), however, it appears rather to have been a comic song from 1906 with words by Arthur J. Lamb and music by Alfred Solman [1] (1868-1937). "The Bird on Nelly's Hat" was popular in both America and England (on the vaudeville and music hall stages respectively), and was released by Edison's National Phonograph Company on a cylinder record (#9450) in January, 1907, sung by vaudeville star Helen Trix (1886-1951), a contralto. The chorus goes: 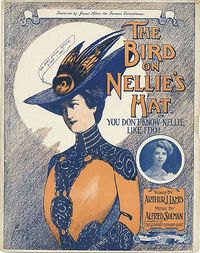 I'll be your little honey, I will promise that,
Said Nellie as she rolled her dreamy eyes,
It's a shame to take the money,
Said the bird on Nellie's hat,
Last night she said the same to Johnny Wise,
Then to Nellie Willie whispered as they fondly kissed,
I'll bet that you were never kissed like that.
Well he don't know Nellie like I do,
Said the saucy little bird on Nellie's hat. 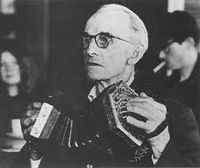