New Bridge of Edinburgh (The)

Back to New Bridge of Edinburgh (The)[edit]

NEW BRIDGE OF EDINBURGH. AKA - "The New Bridge." Scottish, Reel (cut time). D Major. Standard tuning (fiddle). AAB. An anonymous tune commemorating the opening of an Edinburgh bridge in 1772. The span was originally called the 'New Bridge', but after a few years was known as the North Bridge of Edinburgh. It connected the Old Town at High Street and the developing New Town of the city over the Nor' Loch. The loch had become an olfactory and ocular eyesore ("a fetid dump for rubbish") until it was drained by the Lord Provost of Edinburgh, George Drummond, and replaced by gardens (originally reserved for the private use of Princess Street residents). Engineer William Mylne's (1734-1790) three-arched bridge was not at first welcomed: 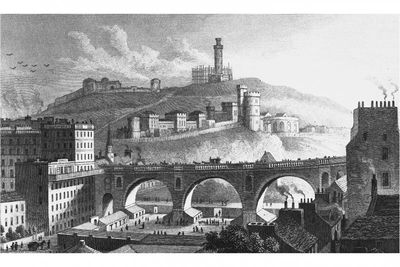 Many persons, whose prejudices were inveterate, ridiculed the idea of a new city, and the North Bridge was a structure of popular dislike, though to please them it was pretended that it was merely to be a more convenient access to Leith than by Leith Wynd and the Canongate. The fall of the south end of the bridge in August 1769, when nearly completed, and by which five persons were killed, confirmed the opposition of many of the citizens. This accident was caused by the insecurity of the foundations, and an immense pressure of earth on the top of the vaults and arches to raise the structure to a proper level; but the denizens of the old alleys maintained that it was the fulfilment of a prophecy of the renowned Thomas the Rhymer, one of whose visions of the future was this same North Bridge of Edinburgh, and who predicted that it would fall three times. This absurdity was religiously believed, and probably assisted indirectly in the formation of the Earthen Mound. The bridge was speedily repaired, and was opened to the public in 1772, at the expense, before its completion a few yearsafterwards, of ₤18,000.

John Glen (1891) finds the earliest printing of this tune in Joshua Campbell's 1778 collection (p. 60). The Gow's "North Bridge of Edinburgh (The)" is a different melody, honoring the same structure.

Back to New Bridge of Edinburgh (The)[edit]