Back to New Coldstream March (1)[edit]

NEW COLDSTREAM MARCH [1]. AKA - "Coldstream's," "Coldstream March (2)," "Marche du Huron," "3rd Coldstream March," "Third Coldstream March." English, March (4/4 time). D Major. Standard tuning (fiddle). AABB. Kate Van Winkler Keller finds the earliest printing of this march to be in Bennett's London fife tutor of about 1767. However, the tune also appears in a number of tutors and march collections seemingly printed all at the same time, including the volumes issued by the Thompsons (Compleat Tutor for the Fife, The Compleat Tutor for the Hautboy, and Thirty Favourite Marches Book 2, all 1770), Longman & Lukey (New and Complete Instructions for the Oboe or Hoboy and Compleat Instructions for the Fife both 1770), and similar publications. See also more listings under "Coldstream March (2)." 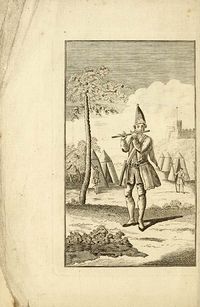 The frontespiece to the Thompson's Compleat Tutor for the Fife

The march can also be found in music copybooks from the latter 18th century, including those compiled by American musicians Captain George Bush and John Hoff. In England it was found in the music manuscripts of William and Thomas Crawshaw, Waits in Leeds in the second half of the 18th and early 19th century ( now in the Special Collections of The Brotherton Library at The University of Leeds), the Aylmore ms. (Lewes, 1796), and in the 1835-41 copybook of musician James Winder (Wyresdale, Lancashire).


Source for notated version: the manuscript collection of Captain George Bush (1753?-1797), a fiddler and officer in the Continental Army during the American Revolution [Keller].

Back to New Coldstream March (1)[edit]