Back to New German Waltz[edit] 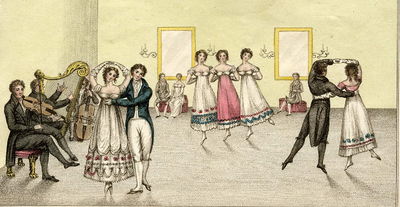 An illustration from the English periodical Belle Assemblee', 1817, showing three forms of the waltz.

There were other period melodies with the same title, although the all refer to the couple-dance known as the waltz, known in various forms on the Continent since the late 17th century, however, not gaining in popularity until 1778, when it was introduced on the Viennese stage in an opera called The Cosarara,' by Vincent Martin. It was introduced in England in 1790 Baron Newman, however, it did not become popular in that country until the late Napoleonic era, c. 1812, although deemed quite scandalous initially.

Back to New German Waltz[edit]