NEW KELVIN BRIDGE, 1891. Scottish, Reel. A Major. Standard tuning (fiddle). Composed by Archibald Morrison (1820–1895) a Falkirk-born musician and violin-maker, who resided and worked in Glasgow where he established his own shop in 1865. According to Honeyman, "There is a long story about how he acquired an old violin from Spain for 16s which turned out to be a real Stradivari, which he sold for 3 pounds. About the year 1836, Morison began to make violin but did not take it seriously till the late 50's. In 1860 he worked for John Alexander Mann in Glasgow. His earliest violins are of the Amati and Stradivari models, his later ones are of the Joseph Guarnaeri model. From about 1865, he worked as a violin maker and repairer in Glasgow. His violin may be classed as good average work, not artistic in the highest sense but excellent for the production of a strong tone, and bring from 5 to 10 pounds. Morrison was a capital strathspey and reel player..." His shop was a rendezvous of fiddle enthusiasts, who were known about Glasgow as "Morrison's Band." 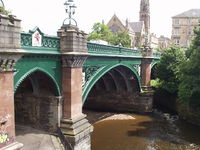 The Kelvin Bridge carries the Great Western Road across the River Kelvin, which forms the boundary between the parishes of Govan and Glasgow. The structure was completed in September, 1891, when the Lord Provost laid the last cornerstone of the western abutment, and Miss Elizabeth Tennent Fleming of Beaconsfield, Kelvinside, cut the ribbon to open the bridge. It replaced two previous bridges that were still standing at the time of construction, although demolished in the process. The bridge is a late Victorian cast iron structure with two main spans over the Kelvin and a smaller span on each side.