Back to New New Nothing[edit]

NEW, NEW NOTHING. English, Country Dance Tune (cut time). B Flat Major. Standard tuning (fiddle). One part. The melody and country dance directions for a duple minor longways dance ("Longwayes for as many as will") were published in London by John Playford in his English Dancing Master [1] (1651, p. 98). The piece was retained in the long-running series in subsequent editions, through the 8th edition of 1690, after which ceases to appear. Playford also published it in his tutor A Booke of New Lessons for the Cithern & Gittern (London, 1652, No. 95), where it is a selection for the gittern, a relatively small, quill-plucked, gut strung instrument that came from Europe via Moorish Spain. 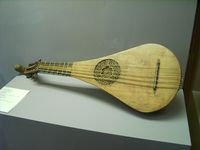 Back to New New Nothing[edit]