Back to New Royal Exchange (The)[edit]

NEW ROYAL EXCHANGE, THE. AKA - "New New Exchange." AKA and see "Adson's Saraband (New)." English, Air (4/4 time). G Minor. Standard tuning (fiddle). ABC. The air and dance instructions ("Longways for as many as will") first appear in London music publisher John Playford's Dancing Master, third edition (1657 and 1665, p. 124) under the title "New New Exchange," named after a large commercial building in London that competed with the Royal Exchange. However, a previous tune had been called "New Exchange (The)," and to avoid confusion Playford renamed it "The New Royal Exchange" beginning with the Dancing Master [1], fourth edition (1670). The tune was retained in the long-running series of Dancing Master editions through the eighteenth and final edition of 1728 (then published by John Young, heir to the Playford publishing concerns). The country dance and tune were also published in Walsh & Hare's The Compleat Country Dancing Master (1718) and John Walsh's 1731 edition of the same volume. See also the precursor melody "Adson's Saraband," from Playford's first edition of the Dancing Master, in 1651. 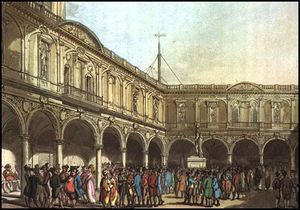 The Royal Exchange, a center for commerce in London, was first built in the Elizabethan era (the Queen officially opened it and awarded the building its royal title and licence to sell alcohol). It was destroyed in the disastrous Great Fire of London in 1666, and was quickly rebuilt to a design by Edward Jerman that resembled the former building. The reigning monarch, Charles II, laid the cornerstone. It was completed some four years later and opened by the Lord Mayor, Sir William Turner. 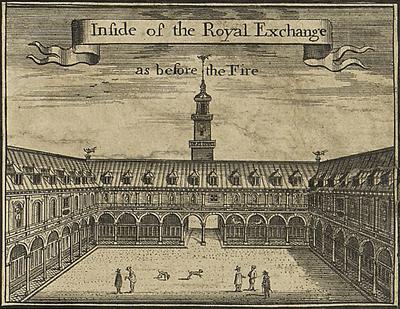 Back to New Royal Exchange (The)[edit]