Back to New Storace 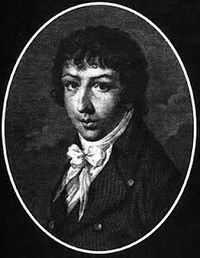 The title probably refers to English musical composer Stephen Storace (1762–1796), born in London. There is an excellent article on Storace on Wikipedia [1], greatly expanded from the sketch below:

His father, Stefano Storace, an Italian contrabassist, taught him the violin so well that at ten years old he played successfully the most difficult music of the day. After completing his education at the Conservatorio di Sant' Onofrio, at Naples, he produced his first opera, Gl'i Sposi malcontenti, at Vienna, in 1785. Here he made the acquaintance of Mozart, in whose Nozze di Figaro his sister, Anna Selina Storace, first sang the part of Susanna. Here also he produced a second opera, Gli Equivoci, founded on Shakespeare's Comedy of Errors, and a "Singspiel" entitled Der Doctor und der A pothicker. But his greatest triumphs were achieved in England, whither he returned in 1787. After creating a favourable impression by bringing out his "Singspiel" at Drury Lane, under the title of The Doctor and the Apothecary, Storace attained his first great success in 1789, in The Haunted Tower, an opera which ran for fifty nights in succession. No Song, No Supper was equally successful in 1790; and The Siege of Belgrade scarcely less so in 1791. The music of The Pirates, produced in 1792, was partly adapted from Gli Equivoci, and is remarkable as affording one of the earliest instances of the introduction of a grand finale into an English opera. These works were followed by some less successful productions; but The Cherokee (1794) and The Three and the Deuce (1795) were very favourably received, and the music to Colman's play, The Iron Chest, first performed on the 12th of March 1796, created even a greater sensation than The Haunted Tower. This was Storace's last work. He caught cold at the rehearsal, and died on the I9th of March 1796.

The character of Storace's music is pre-eminently English; but his early intercourse with Mozart gave him an immense advantage over his contemporaries in his management of the orchestra, while for the excellence of his writing for the voice he was no doubt "indebted to the vocalization of his sister Anna.

Back to New Storace