Back to New Sunderland Pear

NEW SUNDERLAND PEAR. AKA - "New Sunderland Pier." English, Jig (6/8 time). England; Northumberland, County Durham. D Major. Standard tuning (fiddle). AABBCC. The mouth of the River Wear, County Durham, was determined to require managing as early as the reign of Charles II. Attempts were made in the 2nd decade of the 18th century to clean up the river by removing old obstacles, building new lighthouses and planning piers and breakwaters to improve the port. On the river's south bank a stone pier was started in 1723, reaching 333 yards long by 1746, and extended still further in subsequent years until it reached 1,900 feet. This pier was badly damaged by storm swells in 1765, and an replacement pier was planned, although construction did not begin until 1780. The Sunderland site [1] (where there is much more information) explains: 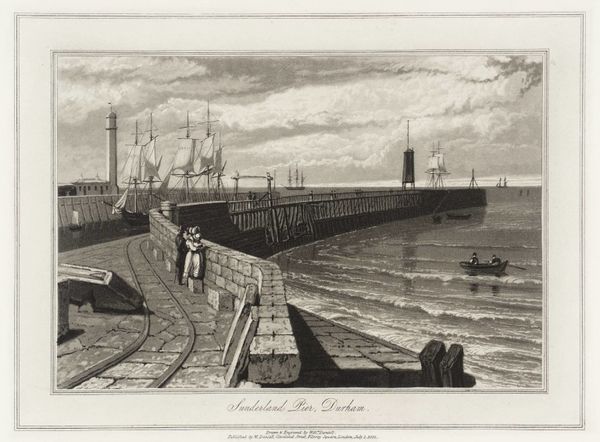 At that time [1746] there was a 'tide-light' at pier end mounted 'on a long pole' which was lit when the harbour was deep enough to enter. A flag was used during daytime. Drawings of the period show that over the years a remarkable variety of 'tide-light' buildings were erected at pier end, each ornate wooden structures that in due course were demolished by the frequent storms.

Back to New Sunderland Pear