Back to New Town of Edinburgh Assemblies[edit] 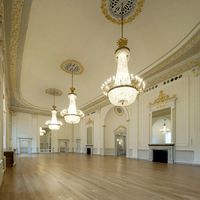 In 1780, an Italian dancing master, by the name of Gallini, proposed to buy land for new Assembly Rooms. The Town Council was supportive of the idea, on condition that the New Assembly Rooms held two charitable balls a year. A competition was held for the design of the building, won by a young architect, John Henderson, who had only been in practice for three years. James Grant's Cassell's Old and New Edinburgh, vol. 2 (1882, pp. 148-149) remarks on Edinburgh's New Town Assemblies:

...but the next chief edifice--which, with its arcade of three rustic arches and portico, was long deemed by those obstinately wedded to use and wont both an eyesore and encroachment on the old monotonous amenity of George Street, when first erected--is the Assembly Rooms.

The principal dancing-hall here is ninety-two feet long by forty-two feet wide, and forty feet high, adorned with magnificent crystal lustres. "The New Assembly Rooms, for which the ground is staked out in the new town," sayd the Edinburgh Advertiser for April, 1783, "will be among the most elegant of any in Britain." In additin to the ball-room, "there is to be a tea-room, fifty feet by thirty-six, which will also serve as a ball-room on ordinary occasions; also a grand salon, thirty-eight feet by forty-four feet, besides other and smaller rooms. The whole expense will be 6,000 guineas, and the building is to be begun immediately. Another Assembly Room, on a smaller scale is to be built immediately by the inhabitants on the south side of the town, in George Square. "Since the peace," continues the paper, "a great deal of ground has been feued for houses in the new town, and the buildings there are going on with astonishing rapidity.

To the assemblies of 1783, the letters of Theophrastus inform us that gentlemen were in the habit of reeling "from the tavern, flustered with wine, to an assembly of as elegant and beautiful women as any in Europe;" also that minuets had gone out of fashion, and country dances were chiefly in vogue, and that in 1787 a master of the ceremonies was appointed. The weekly assemblies her in the Edinburgh season are not among the most brilliant and best conducted in Europe..."

The tune appears not in a Scottish, but an English volume. London publisher Thomas Preston joined his father's music business around 1789, when the firm also purchased the plates and stock of music publisher Robert Bremner (originally from Scotland, relocated to London). The Preston publications were originally issued in the name of John (the father), then Preston and Son (from c. 1789-1798), after which it was in the name of Thomas Preston, or simply, Preston, until 1833, when the firm was sold.

Back to New Town of Edinburgh Assemblies[edit]