NEW WHITEHALL. English, Dance Tune (6/4 time). B Flat Major. Standard tuning (fiddle). "New Whitehall" was first published in Henry Playford's Dancing Master, eleventh edition (1701) and was retained in the long-running series through the eighteenth and last edition of 1728 (then published in London by John Young, heir to the Playford music publishing concerns). It also appears in Walsh & Hare's Compleat Country Dancing Master (1718) and John Walsh's The Third Book of the Compleat Country Dancing-Master (1735 and 1749).

Whitehall Palace, London, for a century and a half the residence of the rulers of England, was destroyed in a fire in 1698. Almost the only building in large Tudor complex to survive the conflagration (luckily, it was also the finest) was architect Inigo Jonses's Banqueting House, the first completed Renaissance building in England. The two-story façade of seven bays divided by columns and pilasters encloses one large, double-cube room, which was used for a variety of court festivities and entertainments. Despite some rebuilding, financial constraints prevented large scale reconstruction. In the second half of the 18th century, much of the site was leased for the construction of town houses. The title may be explained in this passage from Thornbury's Old and New London: Volume 3 (1878): 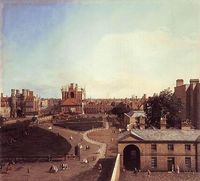 With respect to this highly historical neighbourhood, [Alexander] Pope [(1688–1744)], as usual, minutely accurate in details, thus writes in a spirit of prophecy, which, it is needless to say, has never yet been quite fulfilled to the letter:—

"Behold! Augusta's glittering spires increase,
And temples rise, the beauteous works of peace.
I see, I see, where two fair cities bend
Their ample bow, a new Whitehall ascend;
There mighty nations shall enquire their doom,
The world's great oracle in times to come:
There kings shall sue, and suppliant states be seen
Once more to bend before a British Queen."

And yet, after all, the seer may be regarded as not so very wide of the mark, if we interpret a "new Whitehall" to mean the new Houses of Parliament, and the new Foreign, Indian, and Colonial Offices, which have lately risen on the Park side of Whitehall, and have well nigh effaced the narrow and close cul de sac of Downing Street.