Find traditional instrumental music
This is the stable version, checked on 28 July 2020.
Jump to: navigation, search

Back to News Boys

NEWS BOYS. AKA and see "Peach Blossom Hornpipe," "Three Fingered Jack." American, Hornpipe. F Major (Cole, Kerr, Ryan): G Major (Miller). Standard tuning (fiddle). AABB. News Boys came into being in the mid-19th century, with the advent of cheap daily and evening newspapers whose profits were driven by circulation. George William Panter wrote in The Journal of the Royal Society of Antiquaries of Ireland in 1924, explaining: 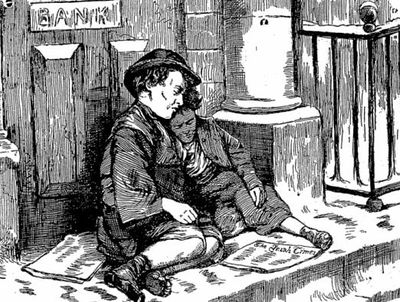 Tired newsboys, from The Irish Times, 1884

The newsboy as we know him now is quite a latter-day institution. Lai Brough, the comedian, whom, doubtless, some may still remember, used to tell how in his early manhood he became assistant publisher to the Daily Telegraph on its establishment in 1855, and that while occupying that position he originated the custom of selling newspapers in the streets by organising a staff of two hundred and forty boys for the purpose. We have seen that the custom existed of selling newspapers in the streets previously, but undoubtedly newsboys were first hired for that purpose in 1855.

As day laborers newsboys worked long hours, received little pay, and were often exploited by a variety of older people. The Wikipedia article on the "News Boys Strike of 1899" [1] states:

Newspaper boys, also called 'newsboys' or 'newsies', were the main distributors of newspapers to the general public from the mid-19th to the early 20th century in the United States. They were not employees of the newspapers but rather purchased the papers from the publishers and sold them as independent agents. Not allowed to return unsold papers, the newsboys typically earned around 30 cents a day and often worked until very late at night. Cries of "Extra, extra!" were often heard into the morning hours as newsboys attempted to hawk every last paper.

Newsboys were not often well received. In 1875 a popular writer of the period wrote, "There are 10,000 children living on the streets of New York....The newsboys constitute an important division of this army of homeless children. You see them everywhere.... They rend the air and deafen you with their shrill cries. They surround you on the sidewalk and almost force you to buy their papers. They are ragged and dirty. Some have no coats, no shoes, and no hat." However, the common ill-treatment of the newsboys was not a major concern of society.

The news boys attempted to strike for better conditions several times, including in 1884, the year after Ryan's Mammoth Collection was published.

The "News Boys" title for the tune may have just been one of convenience, however. Another version, with minor differences, was also printed in Ryan's Mammoth Collection under the title "Peach Blossom Hornpipe," and still another version (again, with minor differences) was published by Elias Howe in his Musician's Omnibus Nos. 6 & 7 as "Three Fingered Jack." William Bradbury Ryan was an employee of the Howe firm in Boston, and its curious that the tune appears three times in the Howe company collections under three different titlea.

Back to News Boys