Back to Nicodemus Johnson's Reel[edit] 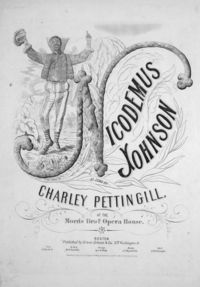 The title is a reference to the post-Civil War minstrel character popularized by blackface comedian and singer Charley Pettingill of Albany. The song (which goes to a different tune than that printed by William Bradbury Ryan) goes:

I've just arrived in town to-day,
And here I is before you,
To sing about my name and occupation;
I come from old Virginia State,
De best in all de nation,
Oh, ho! oh, ho! to Nicodemus Johnson.

My master was a Union man,
He did not like secession,
And so he had to leave de old plantation;
I thought to stay behind him dere
'Twould be an aggravation,
Oh, ho! oh, ho! to Nicodemus Johnson.

Pettingill joined the minstrel troupe Buckley's Serenaders in Boston in 1864, and was an immediate hit. As was usual, he also performed with several other troupes in fairly rapid succession, until he formed his own Pettengill's Minstrels in Albany, N.Y., with whom he stayed for a few years. For a year between 1869 and 1870 he performed with Johnny Allen and Delehanty and Hengler in New York, but he died soon afterwards in Albany, at the age of 27. E. Le Roy Rice (Monarchs of Minstrels) opines: "Mr. Pettengill is declared to have been the original 'Nicodemus Johnson'; if he wasn't, he certainly was the greatest. All honor to his memory."

Back to Nicodemus Johnson's Reel[edit]