Back to Niel Gow's Fiddle[edit] 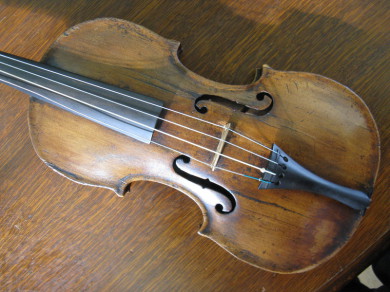 Niel used a violin by Gasparo da Salo, of Brescia, which from its large tone was particularly Suitable for his work, and which according to Mr. Kippen came into his possession thus:--

A very musical Scottish lady, the wife of Colonel MacQuarrie, wished to give a party at her Edinburgh house in George Square, and at which only the greatest musicians in the land should assist. She accordingly wrote to the Duke [of Atholl] for leave of absence for the great fiddler. The request was at once granted, and Niel and his brother arrived at Edinburgh in good time, but had some difficulty finding the house. The servant led them into the kitchen, and then told her mistress that a queer-looking pair of country men were asking for her. While the girl was absent, Niel took down an old violin, hanging on the wall, touched the strings, found the tone good and then taking down the bow started to test its tone thoroughly. Never in his life had he heard such a grand tone come out of a violin.

"Save us a', Donald! Was there ever in the warld sic a fiddle? It sounds like an organ!" he cried, and continued to pour forth his best music from the wonderful violin. The servant returned to take him upstairs, but he saw her not; he was lost to all but the music. The company upstairs began to creep down and stood staring at the absorbed performer. She asked him to stop, but I was only by holding his arm that they got him to obey, and the Niel, wiping the sweat from his brow, said to his hostess, "Lord mem, what a fiddle! What a fiddle! All that night Niel continued to use that strange violin instead of his own, and at every pause gazed at it and exclaimed, "Sic a fiddle! Sic a fiddle!" His whole soul was wrapped up in it. When about to part with him Colonel MacQuarrie, who as eagerly desired a memento of the great player, jocularly said to Gow, "When ye think sae muckle o' the fiddle what do ye say to niffering it for your ain?"

Niel said not a word but in eager haste pulled his own fiddle out of its bag and rammed it into the Colonel's hands, snatched at the Italian instrument, shoved it into the bag, and made for the door, so excitedly as to even forget to thank the donor.

"Come awa, Donald," he anxiously said to his brother, "Come awa, for fear he may rue it and want his fiddle back."

Some time later, in the 1784, Niel was returning from a ball at Dunkeld House on a frosty morning with this violin when he slipped on the ice at Stairdam and fell, the concussion fracturing seriously the breast of the violin. Aberdeen was the nearest town containing a skilled violin repairer, and Niel went straight thither and handed the treasured fiddle to a violin maker named Joseph Ruddiman, who easily made it as sound as it had been before. This great violin, with another, and a violincello, all Niel's property , came into the possession of a gentleman in central Perthshire. Seeing that they had been neglected and were out of order, he took the violin with him to Dresden in 1880, and handed it to Moritz Hamming who took off the breast and found written inside, "Broken on the ice at Stairdam in 1784 and mended in Aberdeen-N. Gow." After careful examination, Hamming pronounced it to be a genuire Gasparo da Salo. The violin has a full rich tone, that of the fourth string being particularly grand.

The story doesn't quite end there, for later Honeyman writes:

The exchange of Colon MacQuarrie's Gasparo da Solo for Niel's old fiddle took place in the year 1783, but the adventures of the latter were not yet over, indeed they might be said to have been only begun, for Colonel MacQuarrie took the violin With him when he went abroad on active service, and had it with him at the taking of the Balearic Isles in Egypt in 1801, And at the siege and capture of Burgos at Orthes, Toulouse, Salamanca, and Vittoria, at the siege and capture of Badajos (where the Colonel was wounded), at the battle of Corunna, whence it retreated with the army, being carried on the Colonel's back under his military cloak in defiance of General Sir John Moore's order to abandon everything that could impede the flight. At last it reached its native Scottish hills, again in perfect safely, and has been so well cared for by the Colonel's descendants that it was played upon by his grandson at a concert given on the 12th of January, 1893, at Tobermory. The special providence which is said to watch over bairns and drunk men must surely have been hanging over that fiddle.

Back to Niel Gow's Fiddle[edit]