Back to Niel Gow's Lamentation for James Moray Esq. of Abercairny

NIEL GOW'S LAMENTATION FOR JAMES MORAY, ESQ. OF ABERCAIRNY. AKA - "Lament for Abercairny," "Lamentation for Jas. Moray of Abercairny," "Neil Gow's Lament for Abercairny." Scottish, Slow Air (4/4 time). G Major (most versions): D Major (Aird): A Major (some Cape Breton settings). Standard or ADae (Cape Breton) tunings (fiddle). AB (Alburger, Hunter, Skye): AAB (Athole, Gow, Martin, Neil). Composed Inver, Perthshire, fiddler-composer Niel Gow [1] (1727–1807) on the occasion of the death of his aristocratic friend and benefactor James Moray (1705-1777), 13th of Abercairney, otherwise known as 'Auld Abercairny,' one of the local Perthshire gentry with whom Gow was quite friendly. Abercairny is an estate in Perth and Kinross, Scotland, near Crief. Moray married Lady Christian Montgomery, the daughter of Alexander, 9th Earl of Eglinton, with whom he had six children (see Gow's "Mrs. Moray of Abercairney's Strathspey/Reel" and David Young's "Lady Christian Montgomery's Hornpipe"). Lady Christian's sister, Lady Margaret, married Sir Alexander MacDonald of the Isles, establishing a connection between the families in Perthshire, the foothills of the Highlands, and the gaeltecht of the western Isles. The Pipe piobraireached "Abercairney's Salute" was composed as a result, as explained by the MacArthurs of Skye website [2]:

This connexion produced a friendship and many reciprocal visits, and Abercairny became very fond of the Pipes, and had MacArthur, his brother-in-law's Piper, a frequent guest at his own seat. Having enlarged, and much improved the mansion, a grand dinner was given, when every one praised the elegance of the new buildings, particularly the dining-room, which was allowed to be in every respect perfect. (This room is in what is now called the old castle. Its dimensions are 33 feet by 21, and 15 feet in height; and it is lighted by four very large windows.) 'The room and the entertainment are not," observed the hospitable proprietor (Abercairny), "altogether complete; one thing is wanting to render them so, to some of us perhaps-Charles MacArthur, to animate the feast with his presence, and with the stirring notes of his great Pipe."

The story is told that Abercarney jokingly attempted to embarrass Niel in public over a five pound loan which he had made to him and which Niel would repay in music, but had not yet done so. Niel, however, turned the tables on him by inferring that the loan had been made in the opposite direction, by commenting to the effect that, if Lord Abercarney had not brought the matter up in the first place, then Niel would not have mentioned it. 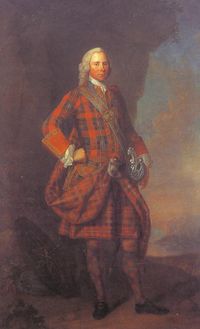 This from a sketch called "Perth to Dunkeld," originally published in 1912:

The (horse-racing) grand stand was but half filled, and only three carriages came. What a change from the time when James Moray, of Abercairney, the first man who established fox-hounds in Perthshire, drove his four-in-hand on the Inch, when he kept the ordinary in a roar by discoursing like an old woman in the soundest Scotch, with a table-napkin round his head, and when he never flagged with hell or jest till the morning sun had peeped into many a ball-room.

Hunter (1988) remarks it is "one of the finest elegiac airs in the repertoire." Niel's third son, Nathaniel, also considered it one of his father's best slow airs (Baptie, Musical Scotland: Past and Present, 1972). It is often followed by the strathspey "Kilravock" or "Kilrack." Gow played the piece, among others, for Robert Burns in October 1787 when the latter visited the fiddler in Dunkeld, and the poet used the tune for his song "Where, braving angry winter's storms." It is said to have been Burns' favorite Gow air, according to Christine Martin (2002). Nigel Gatherer found the following passage in an old book called The Fiddle in Scotland (n.d.) by Alexander G. Murdoch, from an account by Peter Stewart, who accompanied Niel Gow during the Burns visit:

Arriving at Dunkeld, [Burns]...put up at the principal inn...[He] was fortunate in making the acquaintance of Dr Stewart, an enthusiastic amateur violin player. At the dinner table he quoted to his guests the well-known local ditty-

Burns expressed much delight at the proposal...a visit was at once agreed to.

The greeting was a cordial one on both sides, and the meeting of Burns and Gow - both geniuses of the first order in their respective lines - was mutually worthy of each other. The magician of the bow gave them a selection of north-country airs mostly of his own spirited composition. The first tune was "Loch Erroch Side" which greatly delighted the poet, who long afterwards wrote for the same melody his touching lyric "Oh, stay, sweet warbling woodlark, stay!"

At Burns's request, Niel next gave them his pathetic "Lament for Abercairney" and afterwards one of the best-known compositions in the Highlands, "McIntosh's Lament". "Tullochgorum" was also duly honoured, after which the whole party adjourned to the little old-fashioned inn at Inver, where there was a famous deoch, or parting friendly drink.

Cape Breton fiddlers sometimes play the tune in the key of 'A' major, in "high-bass" tuning, or scordatura ADae.

Back to Niel Gow's Lamentation for James Moray Esq. of Abercairny