Find traditional instrumental music
This is the stable version, checked on 5 November 2021.
Jump to: navigation, search

Back to Nigger's Wedding (The) 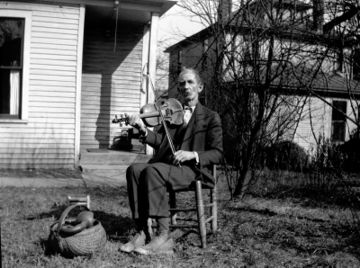 Jilson Setters/J.W. Day, 1932 (Jean Thomas Collection)
NIGGER'S[1] WEDDING, THE. AKA and see "Day's Wedding" "Old Joe's Wedding," "Preachers Wedding." American, Reel (cut or 2/4 time). USA, Ky. G Major. Standard tuning (fiddle). AABB'. The tune was recorded in 1937 in Ashland, Kentucky, for the Library of Congress [AFS 01019 A01] by Alan Lomax from the playing of a Kentucky fiddler whose name was recorded in Lomax's notes as Jilson Setters. "Jilson Setters" was a name for the man born in Boyd County, northeast Kentucky, as James W. Day (1861-1942) but who had the 'Setters' persona fashioned for him by folklorist Jean Thomas, who promoted him in the United States and England. He also made 78 RPM records under the monikers Blind Bill Day and the "Singin' Fiddler of Lost Hope Hollow" (another Thomas advertising inspiration). After a few years Thomas seems to have lost interest in Day/Setters, and he dropped from the limelight although he continued to play locally.

California mandolin player Kenny Hall always substituted the word 'preacher' for the offensive word in the title, and it has also been called "Old Joe's Wedding" and "Day's Wedding" for the same reason.

Back to Nigger's Wedding (The)