Find traditional instrumental music
This is the stable version, checked on 6 January 2020.
Jump to: navigation, search

Back to Nine O'Clock Breakdown 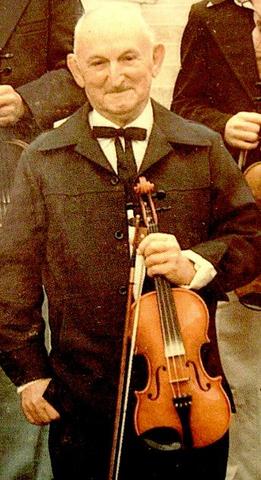 NINE O'CLOCK BREAKDOWN. American, Reel (cut time). C Major. Standard tuning (fiddle). AABB. "Nine O'Clock Breakdown" is one of six sides recorded by the Newton County (Miss.) Hillbillies in 1930 in Jackson, Mississippi, for OKeh Records. The group was led by fiddler Alvis Massengale (1897-1993) of Newton County, who won the Mississippi State Championship for fiddlers in the 1930's. He grew up in the hardscrabble Newton County hills, born to a musical family where both his father and grandfather played the fiddle; Alvis himself learned began to play the instrument at age 11. For much of his adult life he supported himself and his family as a farmer and pulpwood hauler. Although his commercial recording career ended 1930, Massengale continued to play locally, and he and his brother provided background music for the film Ode to Billy Joe. He was recorded in the field in the 1970's on separate occasions by Gus Meade and Howard Marshall (released on Field Recorders Collective FRC 724, "Alvis Massengale", 2017, although "Nine O'Clock Breakdown" was not one of the tunes on that recording), in preparation for the 1976 Bicentennial Celebration at the Smithsonian Institution, at which he performed with his friend Willie Barton.

Back to Nine O'Clock Breakdown