NINE-PINS (NINEPINS) [1]. AKA and see "Cats in the Village, "Quadrille 2nd Set – La Poule." English, Jig. G Major. Standard tuning (fiddle). ABC. Ninepins is a game similar to bowling, and although there are various rules and procedures for the game, it is generally played with hand-sized balls and a set of nine slender pins arranged in a diamond pattern. The game was popular in Europe for several hundred years before being imported to the New World in the 1600's where it was a favorite with early Dutch and German settlers. Ninepins could even be found in Puritan communities despite the elders' consistent objections to such pleasurable activities. The game of ninepins was a popular betting game, too popular for some lawmakers, who outlawed the game in Connecticut and New York in the early 19th century. 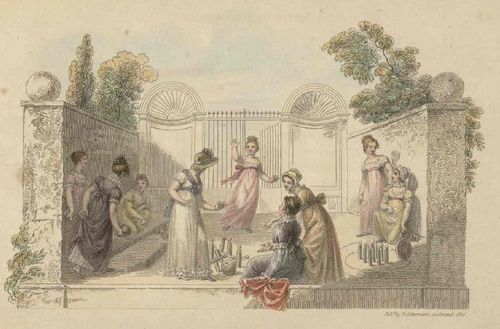 There was a full quadrille set (5 parts) in the 19th century called the Ninepins Quadrille [1], for which various melodies were played. A community dance (in Australia, a Bush Dance) has wide popularity called the Ninepins Quadrille, which has the dancers circling one of the set members (the 'pin'). It was not unusual for the name of the dance to be substituted for the tune name, by association.