Back to Ninth of January[edit]

NINTH OF JANUARY. AKA - "Lost Indian (9)," "Old Time Eighth of January." Old-Time, Breakdown. D Major. Standard tuning (fiddle). AA'BB. Beisswenger & McCann (2008) relate that the tune is Holt's version of Charlie Deckard's playing of "The Eighth of January." It was different enough to provoke exceptions from those who knew the fairly common "Eighth of January" tune, saying it was not correct. Finally, Holt simply gave it a similar but different name. The melody was in the repertoire of Alton Jones under the alternate titles, above. 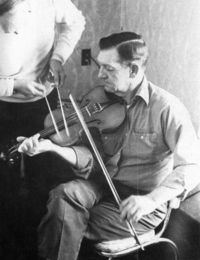 Back to Ninth of January[edit]