Find traditional instrumental music
This is the stable version, checked on 30 July 2021.
Jump to: navigation, search

NO CORN ON TIGERT/TYGART [2]. AKA and see "Jimmy Ossington," "Snakewinder." American, Reel (cut time). USA, Kentucky. G Major. Standard tuning (fiddle). AABB. No relation to "No Corn on Tygart (1)." The tune was recorded in the field for the Library of Congress by collector John Lomax in 1937 from the playing of fiddler James W. Day (1861-1942, Ashland, Ky.), who issued some 78 RPM recordings under the pseudonyms 'Jilson Setters' and "Blind Bill" Day. Day was Ed Haley's neighbor and contemporary, and while title "No Corn on Tygart" was a commonality between them, their tunes are completely different (see No Corn on Tygart (1)" for Hayley's version). In Kentucky the reel also goes by the names "Jimmy Ossington" and "Snakewinder" (Buddy Thomas). 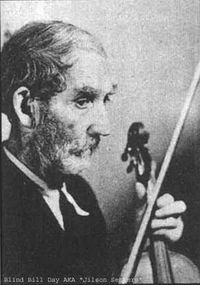 Day came to attention of folklorist Jean Thomas, who managed his career for a time, producing in him a hillbilly caricature of the 'mountain fiddler'. Even his 'blindness' (he was blind for a time as a young man, but had his sight restored by an operation) was exploited. Day made some recordings in the 1930's and continued to be active at regional folk festivals nearly until he died, in 1942. He even performed at the Royal Albert Hall for the King and Queen of England.