North Bridge of Edinburgh (The)

Back to North Bridge of Edinburgh (The)[edit]

NORTH BRIDGE OF EDINBURGH, THE. AKA and see "Miss Watson's Reel," "Belhelvie House." Scottish; Strathspey or Highland Fling. A Minor (Surenne): B Minor (most versions). Standard tuning (fiddle). AB (Surenne): AAB (Balmoral, Gow, Skye): AABB' (Kerr). The North Bridge [1] was completed in 1772, widened in 1876 and reconstructed in 1877. It spans the ravine between the New Town and the Old in Edinburgh, linking them in response to the growth of the city in the 18th century and the need to expand. Previous to the original bridge, an earlier attempt at construction collapsed as it was nearing completion in 1769; the architect, William Mylne {1734-1790}, judiciously chose to leave for America soon afterwards. The strathspey was composed by William Marshall (1748-1833) with the original title of "Belhelvie House," and it appears in his First Collection of 1781. The "North Bridge..." is Gow's title and appears in his Repository, Part 1 (1799). See also the Irish derivative reel "Musical Priest." 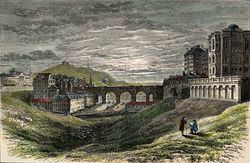 The North Bridge of Edinburgh

Back to North Bridge of Edinburgh (The)[edit]