NOT FOR JOE [3]. AKA and see "Not for Joseph." English, Scottish; Song Air (2/4 time). A Major: B Flat Major (Franklin Square). Standard tuning (fiddle). AB. Words and tune written in 1867 by Arthur Lloyd [1], a Scottish comedian and music hall performer who began his career in Glasgow. He had a knack for melody and versification, but “Not for Joe,” or, originally, “Not for Joseph,” was his most famous song (selling some 80,000 copies before WWI), inspired by a chance event on a bus ride. Lloyd explained his inspiration:

On a very wet night I jumped into a bus at Holborn. The conductor was standing on his perch, talking over the top of the bus to the driver. Every now and then, in answer to some remark of the latter, I heard the conductor reply, ‘Not me, not for Joe.’ This caught my fancy and before I left the bus I had the chorus and melody complete. 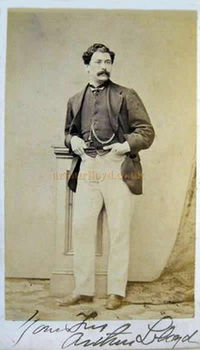 The song was immensely popular and sold tens of thousands of copies. The writer of his obituary believed Lloyd adapted or was influenced by, Beethoven's Piano Trio op. 97--Archduke, for piano, violin, and violoncello, saying "It was singular how well the melody of the great German composer fitted the irresponsible verses of the music-hall song." Lloyd's song begins: 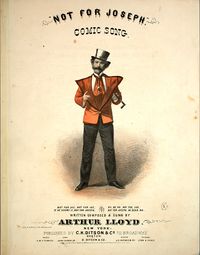 Joseph Baxter is my name,
My friends all call me Joe.
I'm up, you know, to every game,
And everything I know.
Ah, I was green as green could be,
I suffered for it though;
Now, if they try it on with me,
I tell them not for Joe.