NOTTINGHAM CASTLE. English, Country Dance Tune (2/4 time). G Major. Standard tuning (fiddle). AABB. The town of Nottingham derives its name from an Anglo-Saxon chieftain named Snot, and dates from the 7th century. Its name was originally Snotingaham, literally "the town of Snot's people." The Anglo-Saxons held the town (with a period of Viking rule) until the Norman invasion of England, and it was the Normans who built Nottingham Castle in 1068 to help consolidate their rule over the surrounding area. There remained a strong Anglo-Saxon influence in the region, however, and Nottingham Castle will be remembered as the legendary abode of the Sheriff of Nottingham of Robin Hood legend, infamous for his oppression of the non-Norman population. The location of the castle was on an ancient rock, fortified since prehistoric times and filled with caves and passages. The Norman castle was largely destroyed in 1651 during the English Civil War, but was rebuilt later in the century as a Renaissance-style palace by the first Duke of Newcastle. History was not kind, however, and in the early 19th century it was gutted by Luddites angry at the Duke's opposition to Parliamentary reform. In 1875 the shell of the structure was bought by the Nottingham City fathers and restored as the first Provincial Museum of Fine Art. Sadly, only the gatehouse remains of the medieval structure. 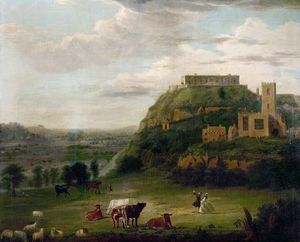 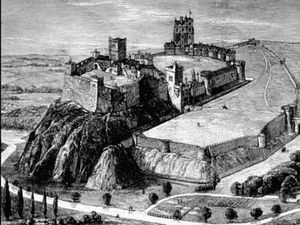 Nottingham Castle prior to the English Civil War.

The tune was entered into the 1780 music manuscript copybook of musician John Fife, who may have been from Perthshire (although there are also references to battles in the Caribbean and the Mediterranean, so he may have spent some time at sea as well). There is a musically unrelated country dance and tune called "Nottingham Castle" in Henry Playford's Dancing Master, 11th edition (1701).