Find traditional instrumental music
This is the stable version, checked on 2 July 2022.
Jump to: navigation, search

Back to O! Susanna 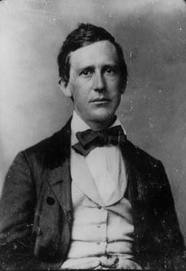 Stephen Foster (1826–1864)
OH SUSANNA(H). AKA - "Susanne Don't You Cry." American (originally); Song Tune. English, Morris Dance Tune (6/8 time). G Major. Standard tuning (fiddle). AB. The original version was written by songwriter by Stephen Foster and became one of his most popular songs. It was first published in 1848, although it was written the year before, when Foster was resident in Cincinnati, Ohio (possibly for his men's social club). It was cited as commonly played for Orange County, New York country dances in the 1930's (Lettie Osborn, New York Folklore Quarterly) and was imported overseas where a jig version was used as a tune for a single step dance in the North-West England morris dance tradition. Richardson (1927, 1955) thinks the tune is the ancestor to "Bile Them Cabbage Down", which Bayard (1981) lukewarmly "supposes" is possible. Raymond Francois (1990) sees resemblance between Foster's melody and the popular Cajun tune "J'etais au Bal." Luther Davis, a fiddler from Galax, Va., had a version of the tune he often played.

Back to O! Susanna