O'CONNOR DONN'S [1], THE. AKA and see "Connor Dunn's." Irish, Reel. G Major. Standard tuning (fiddle). AABB. The O'Connors were Kings of Connaught, and the name O'Connor Donn is in the style of a clan chief, the Prince of Connaught, and is a hereditary title. The O'Connor Donn's house is where the reputed harp of O'Carolan is on exhibit, along with various early manuscripts of the harper's music. 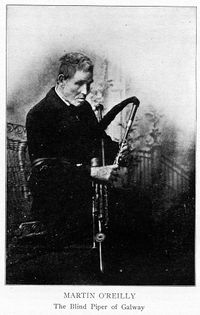 Source for notated version: reconstructed by Cathal McConnell from an old and worn cylinder recording about 1901 by piper Martin O'Reilly (Galway, Ireland). O'Reilly competed in the Dublin Feis the year of the recording but died in a poorhouse early in the 20th century, "ignored by the dilettantes who only a few years before had 'rediscovered' him" [Boys of the Lough]. There is a similarly sympathetic biographical sketch of O'Reilly in Francis O'Neill's Irish Minstrels and Musicians (1913, pp. 239-240).