Back to O never fall in love[edit]

O, NEVER FALL IN LOVE. American, Air (6/8 time). The air was printed by Edward Riley in his Flute Melodies, vol. 4 (1826, p. 21). It was composed by New York songwriter Alexander Lee, and performed by Clara Fisher [1] (1811-1898), “to the most unbounded applause, at the Park Theatre, in the musical farce of the Invincibles.” The Park Theatre was in New York, but other sheet music has it sung “to unbounded applause at the Philadelphia Theatre”. The English-born Fisher was a star of the Drury Lane stage in her childhood (George IV attended one of her performances), but emigrated to America with her family in 1827 at age sixteen. She resumed her career at once, and had a long and very successful career on the American stage. 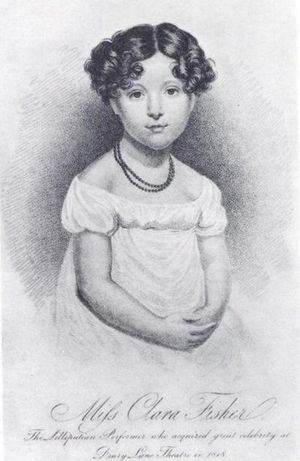 She had a vast Shakespearean repertoire and played both male and female parts. Around 1835 she married an composer and vocal coach, James Meader, and thereafter performed as Clara Fisher Meader. Near the end of her life she wrote an autobiography in 1897 [2]. Country dance directions to the tune were printed in Baltimore publisher [George] Willig’s Musical Magazine in 1831; American musician M.E. Eames entered the tune in his 1859 music manuscript collection.

For me, their ends to gain,
Are cruel when most kind;
Their tears are false as rain,
Their vows are only wind;
And if you say them No,
They swear their hearts are broke;
Yet when half dead with wo,
How nice and plump they look.

Back to O never fall in love[edit]