Of all the airts

Back to Of all the airts[edit]

OF ALL THE AIRTS (THE WIN' CAN BLAW). AKA - "I Love My Jean." AKA and see "Miss Admiral Gordon’s Reel." Scottish, Air (4/4 time) or Strathspey. A Major. Standard tuning (fiddle). AB. The song is set to Robert Burns' adaptation of William Marshall's strathspey "Miss Admiral Gordon's Strathspey/Reel." It was written by the poet while he was at Ellisland awaiting the arrival of his bride-to-be, Jean Armour, from Mauchline in Ayrshire, where he first met her, and was published in Johnson's Scots Musical Museum [1] (1790, No. 235). It is one of the best-known and popular songs of Scotland. 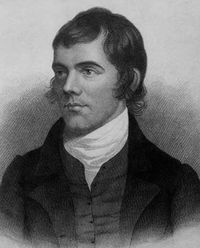 O a' the airts the wind can blaw,
I dearly lo'e the west,
For there the bonnie lassie lives,
The lass that I lo'e best.
Tho' wild woods grow an' rivers row,
Wi' mony a hill between,
Baith day and nicht, my fancy's flicht,
Is ever wi' my Jean.

Back to Of all the airts[edit]