Oh! What a Row

Find traditional instrumental music
This is the stable version, checked on 16 July 2021.
Jump to: navigation, search

Back to Oh! What a Row

OH! WHAT A ROW. AKA and see: "Adventures of a Steam Packet (The)," "Picnickery," "Picknickery." English, American; Air, Country Dance and Reel. C Major. Standard tuning (fddle). AB. "Oh! What a Row!; or, Adventures of a Steam Packet," appears in New York music publisher Edward Riley's 1820 collection, and, as a comic song, was published by him on a single-sheet in 1820, "As sung by Mr. Barnes." In Riley's 1824 collection the tune is characterized as a cotillion. The New York printing was followed almost immediately by a British issue by Hime and Son. The lyric begins: 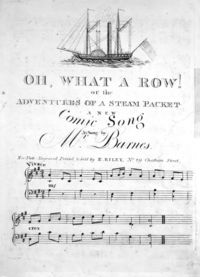 Chorus:
Oh, what a row! what a rumpus and a rioting,
All those endure, you may be sure, that go to sea.
A Ship is a thing that you never can be quiet in, by wind or steam Its all the same, 'twas so with me.

Wife and daughter on the water, said they'd like to sail a bit,
I consented soon repented, soon began to rail a bit;
Pa! now pray! go today, the weather's so inviting,
Lauk I'm sure t'will do such good to you, they feed you like a fighting cock. 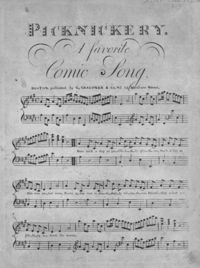 The melody, however, predates is use for "Oh! What a Row" and was originally the vehicle for Thomas Dibdin's [1] (1771–1841) comic song "Picknickery" (Sure, such a day), performed at the Theatre Royal Covent Garden ("Sung by Mr. Fawcet") in 1802. Dibdin was the son of famed English songwriter and theater manager Charles Dibdin.

Back to Oh! What a Row