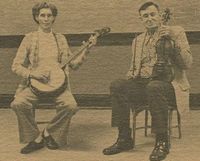 Source for notated version: Frank Reed [Phillips]. Reed (1904-c. 1985) was from the Huntsville-Moberly-Madison area of the Little Dixie region, Missouri, although later in life he moved to St. Louis.