OKLAHOMA REDBIRD. AKA and see "Spotted Pony (1)." Old-Time, Hornpipe. USA, Missouri. B Flat Major. Standard tuning (fiddle). AB (Silberberg): AABB (Phillips). The source for this tune, Lyman Enloe (1906-1997), was originally from Miller County, in the Missouri Ozarks region, and this was one of his favorite tunes. He performed in the 1920's with his uncle Tony Gilmore on local radio stations, and was an active dance and contest performer in his youth. "Oklahoma Redbird" is one of '100 essential Missouri tunes' listed by Missouri fiddler Charlie Walden. The tune is generally credited to Enloe, remarks R.P. Christeson, although there are versions that predate his 1976 recording. Bill Shull (1993) remarks that Enloe took his tune from a commercial recording, and that many fiddlers in his area played it. 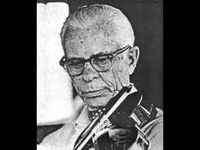