Find traditional instrumental music
This is the stable version, checked on 9 September 2019.
Jump to: navigation, search

Back to Old Abbott

OLD ABBOTT. American, Reel (cut time). A Major. AEae tuning (fiddle). AB. The tune is from the repertoire of fiddler Paisley Abbott (1905-1977), a farmer and fiddler from Limestone County, north-central Alabama, abutting the Tennessee line. Abbott (who pronounced his first name as pace-lee) had played the fiddle in his youth, learning from his father, John Hagood and influential regional fiddler John Chambers (1856-1937). Although he gave up playing for many years, he was inspired to play again when he found his son-in-law also enjoyed old-time music. Hagood played the fiddle in the archaic way, tucked into his chest, with his bow hand positioned up the bow. "Old Abbott" was described as an old tune, predating the Civil War or brought back locally during or just after the conflict [1] 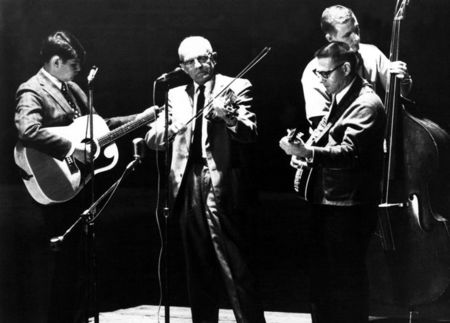 Paisley Hagood in concert, c. 1966.
See also his "Bull of the Woods" (via James Bryan), 'crooked' in the second strain.

Back to Old Abbott