Back to Old Aunt Betsy[edit]

OLD AUNT BETSY. Old-Time, Song and Breakdown. Composed by Ashe County, North Carolina, fiddler Frank Blevins [1] (1911-2001). Frank Blevins and His Tar Heel Rattlers was a name made up on the spot at the 1927 Columbia recording session in Atlanta (where they recorded the tune) for the band consisting of 16-year-old fiddler Frank Blevins, his older brother and guitarist Ed Blevins and banjo player Fred Miller. The band's playing was inspired by a few shots of corn liquor from a convenient jug. Fred Miller told Marshall Wyatt (as told in the liner notes to "Music from the Lost Provinces") a story of the band's waiting for the release of the recording, in the meantime traveling about the coal camps playing. The pulled into Beckley, West Virginia, one day and went into the local record store to ask about new releases, in anticipation that theirs would finally be out. The proprietess told them she anticipated some coming in that day on the train, and the boys made themselves at home in the store and waited. When she returned "Old Aunt Betsy" was the first one she put on and remarked that the follow on the record sure could fiddle. "Oh, he ain't so hot," said Frank, and offered that, had he his fiddle he could do better. The storeowner had string band instruments in the back, which the woman brought out, and the boys went to it. 'How on earth did you learn that,' the astonished lady demanded, pointing out it had just come out. Frank: "Lady, I didn't learn it, I made it!" A similar story is told of the Scots fiddler Niel Gow, so it is perhaps apocryphal. 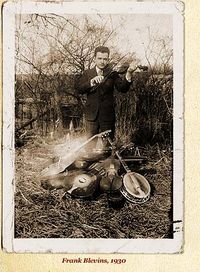 Back to Old Aunt Betsy[edit]