Find traditional instrumental music
This is the stable version, checked on 28 October 2019.
Jump to: navigation, search

Back to Old Catville Quadrille

OLD CATVILLE QUADRILLE. American, Jig or Quadrille (6/8 time). Paul Gifford notes the first change of this quadrille is a variant of the tune known as "Whalen's Breakdown" (in 2/4 time) and the first strain of "Bride of the Wind(s)" (in jig time). Musicologist Gifford says [1] the tune is "almost universal" to Michigan fiddlers in both 2/4 and 6/8 time versions, although no one name appears to have held command. He doubts claims for a Canadian provenance (as in "Bride of the Winds," credited to Jim Magill by Jarman & Co., 1951), and instead believes it was once a tune in wide dissemination. He calls it simply "6/8 in C."

"Old Catville Quadrille" was recorded by 'Colonel' John A. Pattee [2] [3] (1844-1924) for Columbia in 1923--"Catville" was the former name of Pattee's hometown, New Boston, Michigan. Pattee was a Civil War veteran, having served with the 24th Michigan Infantry Regiment and been posted to a gun battery for the Iron Brigade through many of the war's most vicious battles. Although he never attained the rank of 'colonel' (a self-promotion for the stage), he was instrumental in forming a vaudeville act in 1904 called the Old Soldiers Fiddlers, in which two Southern and two Northern fiddlers played their regional music, and, in reconciliation, played together (with handshakes). 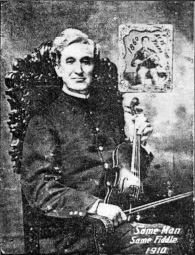 Colonel John A. Pattee, old soldier fiddler and favorite of WEAFS Radio Audience, will never stand before a microphone again. This unfortunate news came with word of his death which cancelled his radio barn dance from WEAF scheduled for Saturday Evening, Dec. 20, 1924,

Colonel Pattee was 80 years of age and a civil war veteran, having served in the twenty- fourth Michigan Volunteer Infantry, called the "Iron Brigade, " which opened the Battle of Gettysburg.

On numerous occasions he has appeared on WEAF's programs, playing the old dance tunes on his fiddle just as he played them before the civil war days.

His voice, calling out each tune in the fashion of the country fiddler, won for him a warm spot in the hearts of WEAF's radio listeners.

Back to Old Catville Quadrille