Find traditional instrumental music
This is the stable version, checked on 9 November 2021.
Jump to: navigation, search

Back to Old Granny Rattle-Trap (1) 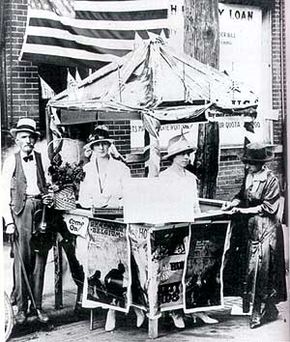 Uncle Am Stuart, helping to sell war bonds during World War I.
Stuart was aged 73 at the time he recorded (traveling to New York to do so), and was the district manager for a local burglarproof lock company. He had learned his music in the Civil War era and was well-known as a dance fiddler who occasionally played with Charlie Bowman and the Hill Billies. His job apparently left him well off; enough so, remarked Hill Billies member Tony Alderman, that he would occasionally "come out on stage at the end of a show and ask the audience if they knew of someone who loved their kind of music but was too sick or poor to attend the show. If anyone identified such a person, Uncle Am would hand over all the money he earned that night to give to that person..." [Bob L. Cox, Fiddlin' Charlie Bowman: An East Tennessee Old-time Music Pioneer, 2007). Uncle Am's brother was a renowned Nashville evangelist minister, Rev. George R. Stuart. Stuart's Vocalion recording is inexplicably marred by an improvisational banjo solo in the middle of the recording that has little to do either melodically or stylistically with Stuart's tune.

"Old Granny Rattle-Trap" was also recorded for the Library of Congress (9494A2) in 1949 from the playing of Bascon Lamar Lunsford, who sang:

Old Granny Rattletrap, what's you doin' there?
Runnin' through the cotton patch hard as I can tear.

This lyric was also sung to "Old Granny Blair." There is also a field recording of Madison County, N.C., fiddler Bill Hensley playing his version of the tune, which he learned from his father[1]. Hensley's father, grandfather and two uncles were all accomplished fiddlers.

Back to Old Granny Rattle-Trap (1)