OLD GREY GOOSE [2]. AKA - "Old Gray Goose." Old-Time, Breakdown. G Major. Standard tuning (fiddle). ABABCCA. Mike Yates (2002) identifies "Old Grey Goose [2]" (Roud 3619) as a minstrel song, "De Old Grey Goose," published and possibly written by A. Fiot in 1844, the year it was published in Philadelphia. The printing contained the note that it was "sung by Aken, the celebrated banjoist." The Christie Minstrels picked up the tune, for four years later it was recorded as being in their repertoire (see also "Grey Goose and Gander"/"Old Grey Goose and Gander"). Dan Tate, of Fancy Gap, Carroll County, Virginia, sang these verses to Yates in 1979: 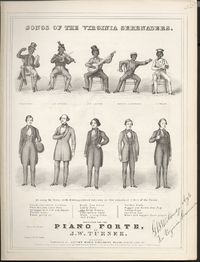 Songs of the Virginia Serenaders, Boston, 1844. "Old Grey Goose" was credited to the troupe's banjo player, J.P. Carter, in the volume.

Johnny Gordon lost his cow,
And where do you reckon he found her?
He found her up that rocky branch,
With a hundred buzzards around her.

Chorus: Look here, look there,
Look away over yander;
Don't you see that old grey goose,
A-smiling at that gander.

Johnny Gordon lost his wife,
And where do you reckon he found her?
He found her up that rocky branch,
With a hundred men around her.

Yates asks comparison of the above with "Saturday Night (2)," and verses are similar to a Mother Goose rhyme "Saturday Night I Lost My Wife." Lyrics to "Old Grey Goose" in part are "floating" verses, heard in other songs such as "Way Down the Old Plank Road" and "My Wife Died on Saturday Night", and published in songsters of the mid-to-late 19th century:

On Saturday night my good wife died,
On Sunday she was buried,
But Monday was my courting day,
And Tuesday I got married.

Monday was my wedding day,
Tuesday I was married,
Wen’sdy night my wife took sick,
Sat’day she was buried.

See also the notes for the derivative song "Lookit Over Yonder," collected in New York's Catskill Mountain region. It appears in Cazden et al's Folk Songs of the Catskills (1982, No. 147, p. 554). The chorus of Foit's song, as Cazden et al point out, "obviously calls for two stagemen, in order to carry out the stylized reply and the 'business' of looking in two directions, hand shading eyes."