Old Grey Mare Came Tearing Out of the Wilderness (The)

OLD GREY MARE CAME TEARING OUT OF THE WILDERNESS, THE. AKA and see "Out of the Wilderness," "Old Abe Lincoln Came Out of the Wilderness," "Johnny Stole a Ham," "Old Yeller Dog," "Old Blind Dog," "White Horse (2) (The)." American; air and reel. USA. G Major. Standard tuning (fiddle). AABB. The music was first appeared in print (as "Down in Alabam" AKA "Aint I Glad I Got Out De Wilderness") in 1858 published by one of Bryant's Minstrels, J. Warner, but it is likely that the tune is older than that. Warner's minstrel lyric began: 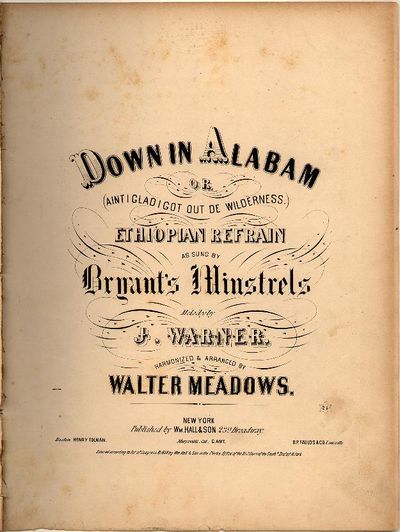 It closely resembles a contemporary revivalist hymn (printed in Allen, Ware and Garrison's Slave songs of the United States (1867):--

and the songs may have had a common folk ancestor. Thomas Talley, in his Negro Folk Rhymes (1922) quotes this lyric as a play-party song:

Bayard (1981) calls it a good example of a popular tune that became traditional (or, if it was a traditional tune reworked by Warner, then a folk tune which became a popular one, which again reverted to folk form). Mark Wilson relates that a parody figured prominently in the famous Lincoln-Douglas campaign of 1860, probably the "Old Abe Lincoln Came Out of the Wilderness" version popular in Civil War times. The title appears in a list of traditional Ozarks Mountains fiddle tunes compiled by musicologist/folklorist Vance Randolph, published in 1954. Related tunes are "Old Blind Dog" and "Old Yeller Dog Came Trottin' Through the Meeting House." Georgia fiddler Earl Johnson [1] (1886-1965) called the tune "Old Grey Mare Kicking Out of the Wilderness." Arizona fiddler Kenner C. Kartchner remembered the tune as a hoedown in the Southwest, c. 1900. The melody was recorded for Columbia Records in March, 1927, by Obed "Dad" Pickard who played it on the jew's-harp. Pickard was the scion of a musical performing family who played on the early Grand Ole Opry stage and even had a television show in California in the 1950's.

Collector R.P. Christeson gathered this verse, a "floater" in old-time tradition, sung to the tune in Missouri:

Danced with a gal with a hole in her stocking
And her heel kept a-rocking (x2). .... [Christeson]

Similar verses appear in E.C. Perrow's Songs and Rhymes from the South (1911, quoted in Mudcat[2]):

She got so pore I couldn't ride; (3X)
Bones stuck up right thoo her hide.

Then I hooked 'r to the plough; (3X)
Swore by doggies! she didn't know how.

Then I skinned some pop-paw(2) lines; (3X)
Swore by doggies! she'd take her time.

Then I turned her daown the creek; (3X)
For her to hunt some grass to eat.

Then I follerd daown the track; (3X)
Found 'r in a mudhole flat uv 'r back.

Then I felt so devlish stout, (3X)
Grabbed her by the tail en' puller 'r out.

Then I thought it weren't no sin; (3x)
Took out my knife en' begun to skin.