Old Hag in the Kiln (The)

Back to Old Hag in the Kiln (The)[edit]

OLD HAG IN THE KILN (An chailleach sa tornóig). AKA and see "Dinny Delaney's (1)," "Hag in the Kiln (The)." Irish, Slide (12/8 time). D Mixolydian/Major. Standard tuning (fiddle). AABB. A version of this tune was played by Dinny Delaney (1836-1919), a blind piper from Ballinasloe, Co. Galway. Philippe Varlet states that Delaney competed in the Dublin Feis at the turn of the century and recorded this tune on a cylinder in 1899. Francis O'Neill gives a sketch of Denis 'Dinny' Delaney in his Irish Minstrels and Musicians (1913): 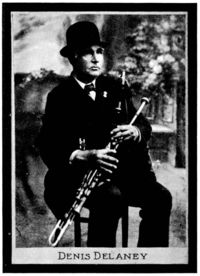 Though totally blind, he is, strange to say, unsurpassed as a judge of cattle and other kinds of farm stock, and so well recognized is his skill in this respect that at fair and market his opinion is eagerly sought when trading is in progress. Stranger still is the fact that furniture moving is his principal occupation. With a table on his head, or a cupboard on his back, he can make his way safely all over town. To see him thus engaged and without a trace of timidity in his footsteps, a stranger would never suspect that he was blind.

Gifted with great conversational powers, an endless fund of humor, and a tenacious memory, he is naturally the life of every gathering which he attends. With such attractions, not to mention his qualifications as a prize-winning piper, we can understand how he won the heart and hand of a buxom young colleen half his age, it being his second matrimonial venture.

Back to Old Hag in the Kiln (The)[edit]