Back to Old Hewson the Cobbler[edit]

OLD HEWSON THE COBBLER. AKA - "The Merry Beggars." English, Air (9/8 time). G Minor. Standard tuning (fiddle). One part. The air appears in Richard Brome's comic play The Jovial Crew [1] (printed in 1652, Air XIX) [2] and the ballad-opera The Grub Street Opera (1731). Although the words to the original song are lost, Chappell (1859) believed it to have referenced Colonel John Hewson [3], who was one of Charles I's judges and also one of several who signed his death warrant. Hewson was in fact once a cobbler, and had only one eye; by fortune and skill he rose to the rank of Colonel on the side of the Parliamentarian army fighting against the forces of the king's loyalists, the Cavaliers. He was knighted by Cromwell and later made one of his Lords, however, as the tide turned he lost all that he had gained and was lucky to escape from England with his life just before the Restoration. He died in Amsterdam in 1662. Since most of the balladeers and broad-siders seemed to favor the Cavaliers, Hewson's humble beginnings and his one-eyed affliction became the butt of much doggerel. Ewan MacColl and Peggy Seegar (in Travelers' Songs of England and Scotland) state that this is the common ancestor to a large family of songs, often quite bawdy. 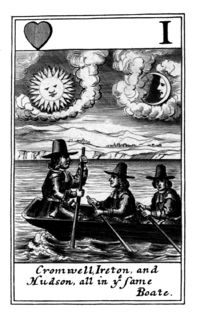 The Ace of Hearts from a pack of Cavalier playing cards. The card reads: "Cromwell, Ireton and Hudson all in ye same boate." Edmund Goldsmid explains: "In 1650, Cromwell was named Commander-in-Chief in Ireland; Ireton, his son-in-law, his deputy; and Hewson or Huson (here misprinted Hudson) governor of Dublin. In the plate they are sailing away from the sun of loyalty towards the night of treason. The portrait of Cromwell at the stern is not to be mistaken. Next to him is Hewson distinguished from Ireton by his older features."

John Hewson, who, from a cobbler, rose by degrees to be a colonel, and though a person of no parts either in body or mind, yet made by Cromwell one of his pageant lords. He was a fellow fit for any mischief, and capable of nothing else; a sordid lump of ignorance and impiety, and therefore more fit to share in Cromwell's designs, and to act in that horrid murther of his Majesty. Upon the turn of the times, he ran away for fear of Squire Dun [the common hangman], and (by report) is since dead, and buried at Amsterdam.

His "one eye" was sometimes ridiculed in political songs of the period, according to Edward Rimbault (Notes and Queries No. 68, p. 123), who gives this example from a ballad called "The Bloody Bed-roll, or Treason displayed in its Colours":

Make room for one-ey'd Hewson,
A Lord of such account,
'Twas a pretty jest
That such a beast
Should to such honour mount.

Back to Old Hewson the Cobbler[edit]