Back to Old Madeira Waltz[edit]

OLD MADEIRA/MADERIA WALTZ. AKA and see "Goodbye My Little Devis" Old-Time, Waltz. USA, Texas. A Major/Mixolydian. AEae or Standard tunings (fiddle). AA'B. Michael Mendelson, in liner notes to the album "Texas Crapshooter" (1978), explains the titles for the tune, as related by Glen Farr, one of the three musical Farr brothers of Texas:

We [the family] went to play for a dance, a farewell dance for a girl whose name was Devis. Now there was this fellow, kind of a clown, and he did a little singing and a little bit of guitar picking. He came up with this song because it was her farewell party:

The change in title from "Goodbye My Little Devis" to "Old Maderia Waltz" can probably be attributed to an unknown recording executive. 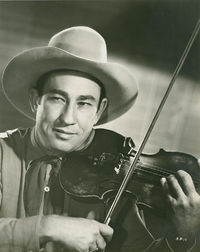 Source for notated version: Hugh Farr [Phillips]. Farr was born in Plano, Texas, December 6, 1906, and joined the group The Sons of the Pioneers in 1934, where he played fiddle and sang bass and occasionally lead.

Back to Old Madeira Waltz[edit]