Back to Old Molly Hare 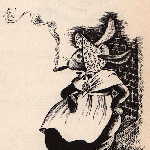 Old Molly Hare, whatcha doin' thar,
Running through the cotton patch, as far as I can tear.

Ford (1940) relates an improbable story he had from a man who had been a noted caller of old-time dances when he was younger, around the 1870's or 1880's. According to him the settlers of the Missouri/Kansas prairie region plagued by rodent holes, especially rabbits, which were a hazard to cattle or horses. There was a boon to the burrows, however, as they could by used for fence posts, saving the homesteader the arduous labor of digging another hole to set his post. Usually, says Ford, the settlers as a matter of pride took great pains to set their posts in a straight line. There was however, one character in the community, "whose ingenious efforts to avoid over-exertion were a constant source of amusement to his friends and neighbors."

When he built his fence he was not particular about a straight line. He selected rows of rabbit holes, set his posts, strung the wire and had his fencing done in no time at all. But the result was even more erratic than he had anticipated. He was surveying the completed work one day when several neighbors, coming in from the range, rode up. They took one look at the fence and then had their usual laugh, to poor old John's embarrassment. 'John', said one, in a voice of suppressed amusement, 'how much liquor does it take to the mile, to build a fence like that?' 'Well,' said John, scratching his head, 'I hadn't calculated fer it to be a worm fence. Reckon though, if I had a still hitched to it and the neighbors pourin' cold water along, like they do on all my honest endeavors, you fellers 'ud be down at t'other end of the fence holdin' yer cups to ketch the whiskey!' As soon as the laughter had subsided over John's turning the tables, the neighbor added: 'Anyhow, you certainly did get your fencing done in a hurry, John. Did you have any help?' 'Yes and no,' was the reply. 'I sort of took advantage of Mother Nature on part of the work. Old Molly Hare dug the post holes—but me and the mules had to set the posts and string the wire!' It was shortly after this episode that the above-mentioned verse appeared, and began to be used by callers when the tune 'Old Molly Hare' was played.

The tune was recorded for the Library of Congress by musicologist/folklorist Vance Randolph from Ozarks Mountains fiddlers in the early 1940's; also recorded for the Library of Congress in 1939 by Herbert Halpert from the playing of Tishomingo County, Mississippi, fiddler W.E. Claunch and Meridian, Mississippi, fiddler W.A. Bledsoe (who was originally from Tennessee). It was a tune in the repertoire of fiddler and Confederate veteran Arnold A. Parrish (Willow Springs, Wake County, N.C.), as recorded by the old Raleigh News and Observer. Parrish was a contestant at fiddler's conventions held in Raleigh prior to World War I. The tune/song appears in several older collections: Brown (3:211–213), collected mostly from black informants; Richardson (American Mountain Songs) and Randolph (2:359) contain versions from white sources, the latter from the Ozarks Mountains. See also Estill Bingham's (1899–1990) interesting Kentucky variant "Old Granny Blair." The North Georgia band The Skillet Lickers played the tune once through in their skit-medley "Prosperity and Politics Part 1" (1934) under the title "Blue Eagle Rag," named in honor of Roosevelt's New Deal programs (whose symbol was a blue eagle).

Back to Old Molly Hare