Find traditional instrumental music
This is the stable version, checked on 8 March 2021.
Jump to: navigation, search

Back to Old Plank Road

OLD PLANK ROAD. AKA and see "Way Down the Old Plank Road," "Plank Road." American, Song & Breakdown. D Major. Standard tuning (fiddle). AA'BB'. Plank roads were a feature of American transportation in the mid-19th century, the first being constructed in Michigan (1837) and New York (1844). When they were properly maintained they provided a smooth surface, and should not be confused with log 'corduroy' roads that were often quite dangerous. Construction consisted of laying planks of pine or oak, eight to sixteen feet long and three to four inches thick, across 'sleepers' or 'stringers' that had been placed parallel. 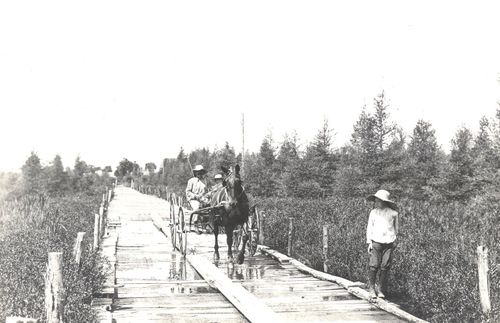 The tune/song was recorded by David Harrison "Uncle Dave" Macon [1] (1870-1952), the "Dixie Dewdrop," a popular and colorful entertainer and recording star in the early days of radio and 78 RPM recordings. Macon sang and played banjo, sometimes with a group called the Fruitjar Drinkers. "Way Down the Old Plank Road" is a song about working on a Georgia chain gang. The road theme is one Macon would have been attuned to, however, for before he made it big with his music he was the proprietor of the Midway Mule and Wagon Transportation Company. 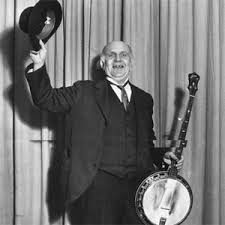 Rather be in Richmond with all the hail and rain,
Than to be in Georgia boys wearin' that ball and chain.

I went down to Mobile, but I got on the gravel train,
Very next thing they heard of me, had on that ball and chain.

Doney, oh dear Doney, what makes you treat me so,
Caused me to wear that ball and chain, now my ankle's sore.

Knoxville is a pretty place, Memphis is a beauty,
Wanta see them pretty girls, hop to Chattanoogie.

I'm going to build me a scaffold on some mountain high,
So I can see my Doney girl as she goes riding by.

My wife died on Friday night, Saturday she was buried,
Sunday was my courtin' day, Monday I got married.

Eighteen pounds of meat a week, whiskey here to sell,
How can a young man stay at home, pretty girls look so well.

Harry Smith (Folkways FA2953, 1952) writes: "Dave Macon, the 'Dixie Dew Drop', was born at Smart Station, Tennessee, October 7th, 1870. He learned his trade in Nashville, where his parents operated the Macon Hotel, a theatrical boarding house, and became a professional entertainer about 1888. Many of the songs he learned before 1900 from workers on the levee and along the Mississippi were recorded among the hundred or so titles he cut between 1923 and 1938, and are unique among commercial recordings. His descriptions of life on the chain gang here and on ("Buddy Won't You Roll Down the Line") of this set are two of the most characteristic of a number of songs of this type he recorded. The verses about the scaffold and the wife's death are widely known folk-lyric elements." African-American collector Thomas Talley (born c. 1870) printed a tune called "Aunt Dinah Drunk" in his 1922 work Negro Folk Rhymes, which includes a chorus which shows up in the Macon song "Way Down the Old Plank Road."

A few bars of the verse melody appear in "I'm Off to Charlestown," an air in Kerr's Merry Melodies (c. 1880's) that sounds as though it was imported from America.

See also listing at :
Jane Keefer's Folk Music Index: An Index to Recorded Sources [2]
Hear/see a banjo version of the song on youtube.com [3] [4]

Back to Old Plank Road