Find traditional instrumental music
This is the stable version, checked on 12 November 2019.
Jump to: navigation, search

Back to Old Reel of Eight

OLD REEL OF EIGHT. Canadian, Reel (cut time). D Major. Standard tuning (fiddle). AABB. A 'crooked' tune of Métis origin, in traditional repertory. "Reel of Eight" is the name of a dance for four couples, with dancers facing each other in two lines (one of men, one of women). Anne Lederman continues the description[1]: "Each alternate couple moves (man forwards, lady backwards) to create a new set of four couples beside the first. The dance proceeds with an alternation of jigging on the spot to one part of the tune, and ‘travelling’ on the other in a figure of 8 pattern with the corresponding couple in the other set." A number of tunes were called "Reel of Eight" in association with dance whose names (if any) were lost in the tradition. "Old Reel of Eight" was recorded in the field from the playing of Métis fiddler Gilbert Anderson (1934-2011, Edmonton, Alberta), but it was well-known among older Métis fiddlers. 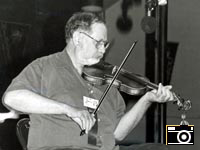 Back to Old Reel of Eight