Back to Old Rosin the Beau[edit] 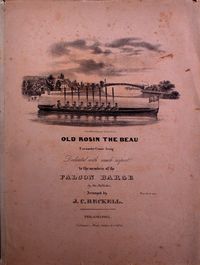 A song version, "Old Rosin the Beau" [1] (Roud 1192), was published in America in 1838 ("A Comic Song Dedicated to the Members of the Falcon Barge by the Publisher"), and, while this may be (one of) the earliest printings, it is thought that versions of the air and words predate this, probably from Great Britain or Ireland. The tune was borrowed for numerous songs, particularly in America, but it was most popular as "Rosin the Bow/Beau." On the minstrel stage it was one of the frequent songs of the character Mr. Corn Meal, a creation of the white black-face performer Jim "Daddy" Rice, who based his version on that of a street singer he heard in New Orleans. A shape-note hymn, "Sawyer's Exit" (Sacred Harp, 1850, p. 338) employs the melody. It is attributed to Seymour Boughton Sawyer (1808-1844), a Methodist preacher of Montgomery, Alabama, who was supposed to have written the words on the day of his death, requesting it be set to the tune of "Rosin the Beau." As a dance tune it was cited as commonly played for Orange County, New York, country dances in the 1930's {as "Old Rosin the Bow"} (Lettie Osborn, New York Folklore Quarterly). County Sligo fiddler Michael Coleman recorded a cognate version in New York in the 78 RPM era (in a medley with "Mrs. Kenny") under the title "Men of the West (1)."


Recorded sources: Fretless 119, Rodney and Randy Miller--"Castles in the Air" (played as a waltz).

Back to Old Rosin the Beau[edit]