Find traditional instrumental music
This is the stable version, checked on 14 September 2021.
Jump to: navigation, search

OLD SLEDGE [1]. American, Reel (cut time). USA, West Virginia. D Major. AEad (Burl Hammons), ADad (Ed Haley), DGdg (Harvey Sampson) or Standard tunings (fiddle). ABB (Hammons/Krassen): AABB' (Phillips). 'Old Sledge' is a Southern and Western name for the game of cards commonly called (in England, esp.) 'All Fours'. It was one of the principle card games of colonial times and by the beginning of the 19th century it was the foremost American card game, remaining so for nearly a hundred years. The game apparently migrated to America from England in the early 1700's, and was also known by the names '7-Up' and 'High-Low-Jack', but it was a true form of 'All-Fours'. It is also reported that in Kentucky 'Old Sledge' was sometimes used as a name for dogs (The Devil's Box, March, 1974).

The tune is strongly identified with West Virginia fiddlers, so much so that it has been called "a West Virginia standard," although each fiddler seems to have his or her own special version. 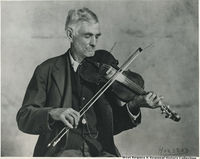 West Virginia fiddler Ernie Carpenter learned the tune from legendary fiddler Lewis Johnson "Uncle" Jack McElwain (1856-1938) of White Oak, a tributary of Laurel Creek, near the village of Erbacon, Webster County, West Virginia. Local lore, remarks Gerry Milnes (Play of a Fiddle, 1999), gives that Erbacon was named by the habit of the cook at the local hotel, who invariably asked, "Do you want ham 'r bacon?" Investigating further, Milnes found that the town was actually named for E.R. Bacon, an official with the B & O railroad. Milnes also reports that influential Logan County fiddler "Blind Ed" Haley (who had moved to Ashland, Kentucky) learned "Old Sledge," among other tunes, from McElwain in the course of Haley's playing circuits (Milnes opines the Haley's rendition is "not notable"). Another Erbacon fiddler, Harry Scott (d. 1986), told Milnes that he seemed to rise three feet up off the ground upon hearing McElwain playing "Old Sledge," it was so good.

AEad tuning is often preferred for this tune, as in the playing of West Virginia fiddlers Jack McElwain, Melvin Wine and Ernie Carpenter, as well as Burl Hammons.