OLD SPEDLINGS CASTLE GHOST'S DANCE. Scottish, Air or Country Dance (6/8 time). A Major. Standard tuning (fiddle). AAB. Composed by James Porteous (1762-1847), a fiddler-composer, farmer and miller from Annandale who published A Collection of Strathspeys, Reels, Jigs and Hornpipes (Edinburgh, c. 1821) containing original tunes. "Old Spedlings Castle Ghost's Dance" is among them, and commemorates a rather gruesome Scottish legend. Spedling Castle, Spedlins Tower, was a 15th century keep on the south bank of the River Annan in Dumfriesshire, and was anciently the seat of the Jardines of Applegarth. It was perhaps most famous as the environs of the Spedlins Tower ghost, the shade of James "Dunty" Porteous (1650-75) an ancestor of composer James Porteous, but like the composer, was a miller, albeit for the village of Milhousebridge. Dunty (an Old English word that is thought to have meant "argument" but whose later meaning was 'one who knocks') reputedly had a quarrelsome nature, and one day while delivering bread to the tower became embroiled in an argument with Sir Alexander Jardine, the Baronet. It did not end well for Dunty, who was imprisoned by the nobleman in the dungeon of the keep. Called to Edinburgh on pressing business a short time later, Jardine neglected to leave the keys to the cell or instructions for the care of his prisoner, whom he forgot about for several says. 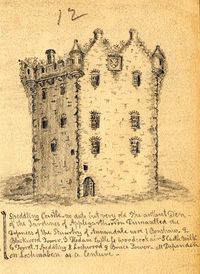 Spedlins Castle, from The Antiquities of Dumfries and its Neighbourhood Collected and Drawn by John McCormick

Grose, in his Antiquities of Scotland vol. i (1789), relates the story:

Spedlings Tower is chiefly famous for being haunted by a bogle or ghost. As the relation will enliven the dullness of antiquarian disquisition, I will here relate it as it was told me by an honest woman who resides on the spot, and who, I will be sworn, from her manner, believed every syllable of it:--

In the time of the late Sir John's grandfather, a person named Porteous, living in the parish of Applegarth, was taken up on suspicion of setting fire to a mill, and confined in the lord's prison, the pit or dungeon at this castle. The lord, being suddenly called to Edinburgh on some pressing and unexpected business, in his hurry forgot to leave the key of the pit, which he always held in his own custody. Before he discovered his mistake, and could send back the key, which he did the moment he found it out, the man was starved to death--having first, through the extremity of hunger, gnawed off one of his hands. Ever after that time the castle was terribly haunted, till a chaplain of the family exorcised and confined the bogle to the pit, whence it could never come out so long as a large Bible, which he had used on that business, remained in the castle. It is said that the chaplain did not long survive this operation. The ghost, however, kept quietly within the bounds of his prison till a long time after, when the Bible, which was used by the whole family, required a new binding, for which purpose it was sent to Edinburgh. The ghost, taking advantage of its absence, was extremely boisterous in the pit, seeming as if it would break through the iron door, and making a noise like that of a large bird fluttering its wings. The Bible being returned, and the pit filled up, everything has remained perfectly quiet. But the gentlewoman declared that, should it again be taken off ' the premises, no consideration whatsoever would induce her to remain there a single night. 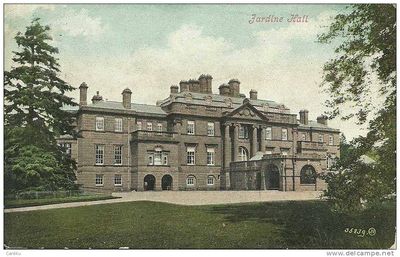 The Bible was printed in London by "Robert Baker, A.D. 1634" and was, in the 19th century, still at Jardine Hall, the name of the manor the Jardine family built in 1814 across the River Annan from their former residence of Spedlings Tower. Spedlings Tower became increasingly run down until it was restored in the 1960's to again serve as a residence. Jardine Hall fared worse, and was demolished in 1964.

It is thought that James "Dunty" Porteous was the illegitimate son of Sir Alexander, the product of a rape of his mother who was a servant at Spedlings Tower.