Find traditional instrumental music
This is the stable version, checked on 15 March 2021.
Jump to: navigation, search

Back to Old Time Cinda 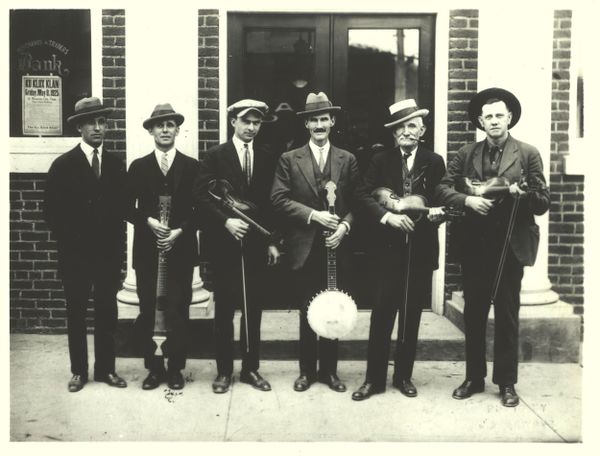 Although some members of the group changed over time, the personnel on the "Old Time Cinda" recording were bothers Al and Joe Hopkins (piano and guitar), John Rector (banjo) and Alonzo Elvis "Tony" Alderman. The Hopkins brothers (with the addition of brothers Elmer and John) had formed a quartet group that played regularly in Washington D.C.'s majestic theater, and John Rector had recorded previously, and all hailed from northwestern North Carolina (Wautauga County) and southwestern Virginia (Grayson & Carroll Counties). The brothers often vacationed at the family farm in Gap Creek, North Carolina, and the eldest brother, Jacob, a surgeon and musician, ran a rural hospital/clinic in Galax. In the spring of 1924, while visiting Jacob, Joe met journeyman barber Tony Alderman in his shop in Galax and the two of them became a trio with brother Al. Galax storeowner John Rector joined them soon after. Their first recording session, in New York in 1924, was not successful due to problems with the recording technology, but their January, 1925, session, which produced "Old Time Cinda," "Silly Bill" and other numbers was more successful.

Back to Old Time Cinda