OLD TIME COTTON EYED JOE. American, Reel (cut or 2/4 time). A Mixolydian. AEae tuning (fiddle). AABB. The tune was in the repertoire of fiddler Norman Edmonds (1889-1976) of Hillsville, Virginia, a community in the southwest part of the state, near Galax. Edmonds only recorded a few sided in the 78 RPM era with J.P. Nestor, but continued to play for dances and events in his area. In later years he and his band The Old-Timers played on local radio broadcasts from the Hillsville station. Some of these radio performances from the 1950's and 60's were released on his 1973 LP (SFR-DU 33002). 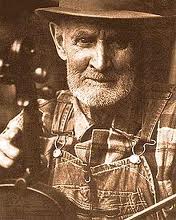 Norman Edmonds
Edmonds "Old Time Cotton Eyed Joe" bears resemblance to another tune in his repertoire, "Pretty Little Gal/Pretty Little Girl (1)." There is no concordance with other "Cotton Eyed Joe" tunes, although there is a rather vague similarity; the preface word "Old..." was often used to denote a tune that was different (but perhaps reminiscent) from the one usually given the name, the difference perhaps being attributed to antiquity.